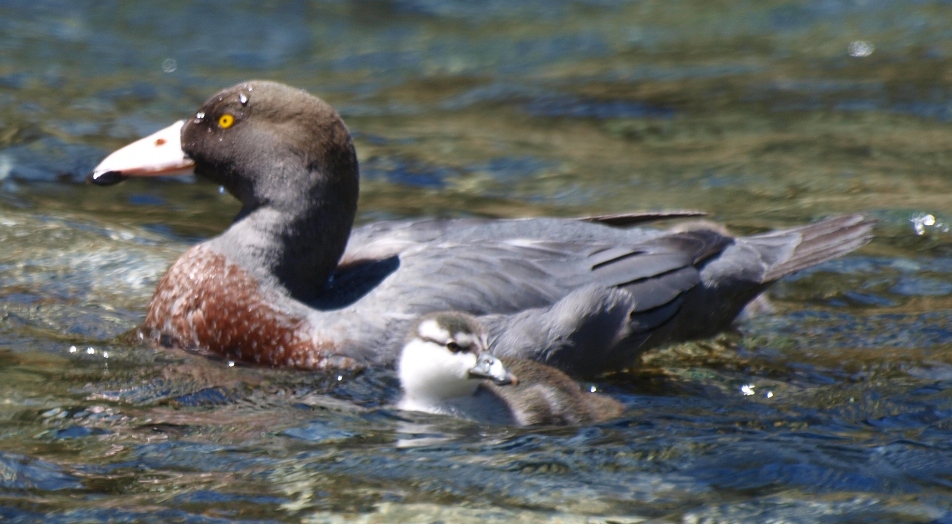 The blue duck (or whio; Hymenolaimus malacorhynchos) is a unique threatened species of waterfowl endemic to New Zealand. It is the only member of its genus and has no close relative anywhere in the world. It is a river specialist which inhabits clean, fast flowing streams in the forested upper catchments of New Zealand rivers. A stable population inhabits areas of Fiordland such as the Clinton and Arthur Rivers following the Milford Track.

The Department of Conservation species threat classification of blue duck/whio is "Nationally Vulnerable".

Blue duck are recorded by the International Union of Conservation for Nature (IUCN) as "Endangered" because it has a very small and severely fragmented population which is undergoing a rapid decline owing to a variety of factors, most notably the affects of introduced predators.

The blue duck is believed to have appeared at a very early stage in evolutionary history and the species’ isolation in New Zealand has resulted in it acquiring a number of unique anatomical and behavioural features.

Blue ducks have unique features such as streamlined head and large webbed feet to enable them to feed in fast moving water. The upper bill has a thick semicircular, fleshy ‘lip’ that overlaps the lower bill allowing them to scrape off insect larvae that cling to rocks, without wear and tear.

Blue duck establish exclusive territories. Strong pair bonding results in individual pairs occupying the same stretch of river year after year which they aggressively defend against other blue duck, as well as grey duck, paradise duck and even shags or gulls. The larger (1,000 gram) males can live for up to 12 years but smaller (750 gram) females are generally much shorter lived.

The pre-European fossil record suggests that blue duck were once throughout New Zealand. They are currently considerably less widespread being limited to the less modified catchments of the Urewera, East Cape and central areas of North Island, and along the West Coast of South Island from Nelson to Fiordland.

There is growing concern for the species as most studies suggest that this already reduced range is continuing to contract. Remaining populations tend to be fragmented and isolated, have low reproductive success and are increasingly dominated by males. It is estimated that about 640 pairs remain on North Island while just under 700 pairs remain on South Island giving a total population of between 2,000 and 3,000 individuals.

•They are mainly active during early morning and late evening periods, hiding during the day in log-jams, caves and other such places – some populations have adopted an almost nocturnal existence.

•Blue ducks vigorously defend their river territories all the year round. The size of each pair’s territory can vary (average is about 1.5km) depending on the quality of the habitat and food available.

Blue ducks nest between August and October, laying 4-9 creamy white eggs. The female incubates the eggs for 35 days and chicks can fly when about 70 days old.

Nesting and egg incubation of four to seven eggs is undertaken by the female while the male stands guard. Nests are shallow, twig, grass and down-lined scrapes in caves, under river-side vegetation or in log-jams, and are therefore very prone to spring floods. For this, and other reasons, their breeding success is extremely variable from one year to the next

With such habitat requirements, blue duck are key indicators of river system health. The higher the number of breeding pairs of blue duck on a given stretch of river, the greater the life supporting capacity of that river.

•It is one of only three species amongst the world’s other 159 waterfowl that live year round on fast-flowing rivers. The others are found in South America and New Guinea.

•In contrast to other waterfowl, blue ducks obtain all their food (consisting almost exclusively of aquatic insect larvae) and even rear their young, in the fast moving rapids and riffles of their home territories.

•Where blue ducks still reside in middle-river habitats, population densities and productivity are much higher than in typical headwaters. It is likely therefore that the upper-river habitats where blue duck are mostly found today are not preferred but sub-optimal habitats.