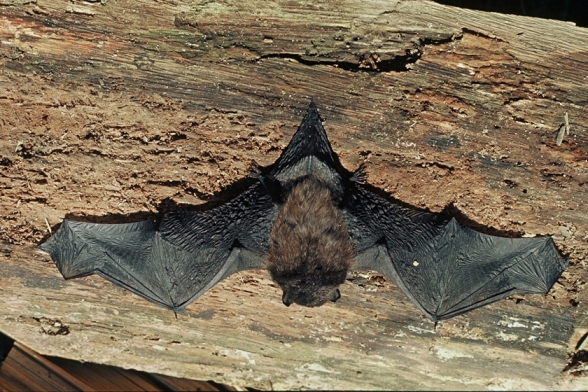 There are two species of short-tailed bat. The greater short-tailed bat (Mystacina robusta) was found on two islands off Stewart Island but following an invasion of ship rats, it was last sighted in 1967 and is probably extinct.

Short-tailed bats weigh 12-15 grams, have large pointed ears, a free tail and are a mousy-grey colour.

•Unlike most bats, which catch their prey in the air, the short-tailed bat has adapted to ground hunting and is one of the few bats in the world which spends large amounts of time on the forest floor, using its folded wings as `front limbs' for scrambling around.

•Short-tailed bats are found in indigenous forests where they roost, singly or communally, in hollow trees. The bats go into a 'torpor' in cold weather and stay in their roosts. They wake up as soon as the weather becomes warmer.

•Thought to be a lek breeder, i.e. males compete for traditional `singing' posts and `sing' for a female.

•Its diet consists of insects, fruit, nectar and pollen and it is thought to be an important pollinator of the Dactylanthus or woodrose, a threatened parasitic plant which grows on the roots of trees on the forest floor.

The long-tailed bat (Chalinolobus tuberculatus) belongs to a more widespread family and is closely related to five other species of wattled or lobe-lipped bats in Australia and elsewhere. It is the more 'common' bat and is widely distributed throughout the mainland, Stewart Island, Little Barrier and Great Barrier islands and Kapiti Island.

•Long-tailed bats are smaller than the short-tailed bat, chestnut brown in colour, have small ears and weigh 8-11 grams. They are believed to produce only one offspring each year.

•The bat's echo-location calls include a relatively low frequency component which can be heard by some people.

•An aerial insectivore, it feeds on small moths, midges, mosquitoes and beetles.

Long-tailed bats were common throughout New Zealand in the 1800s and were recorded in colonies of “scores”, “hundreds”, and “thousands”. By 1900-1930 they were becoming scarce in many districts. Recent surveys indicate that South Island long-tailed bats are rarer than previously thought. They were once common in Dunedin, Invercargill and Christchurch, where they roosted under the wooden bridges across the Avon River until 1885.